The dried bed of a coal ash pond on the grounds of Duke Energy’s closed coal-burning plant along the Dan River in Eden, N.C. PHOTO: MATT BELL/THE REGISTER & BEE/ASSOCIATED PRESS

RALEIGH, N.C.—State regulators told Duke Energy Corp. on Monday that it must completely remove coal ash from all storage basins in the state, rejecting the company’s proposal to cover some ponds and leave that ash in place.

The decision was a blow to Duke, which had originally agreed to remove coal ash from 22 of its 31 basins in the state and move it to lined landfills. The company proposed capping nine of its basins that it viewed as structurally sound and posing little threat to groundwater.

Coal ash is a byproduct from coal-fired power plants, which scrub potential air pollutants from their emissions. That ash can contain arsenic, selenium, lead and mercury.

Duke said Monday’s order would add decades and more than $4 billion to the original $5.6 billion estimate for cleanup at its plants. Duke is in the process of gradually retiring its coal plants. Some of the coal-ash basins are at plants that have already closed.

“We will carefully review today’s announcement and will continue to support solutions that protect our customers and the environment,” the company said in a statement.

“The science points us clearly to excavation as the only way to protect public health and the environment,” he said. 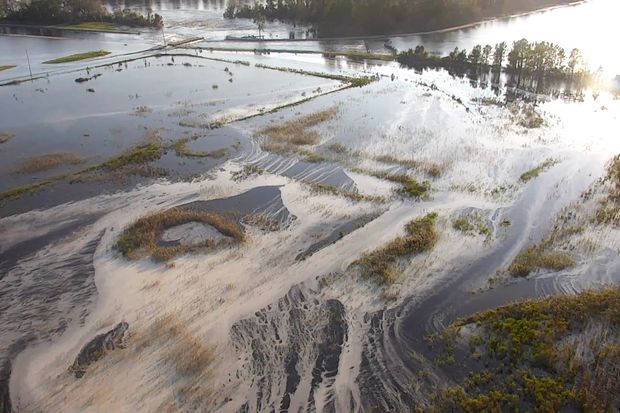 Coal ash has been a flashpoint in the state since February 2014, when a metal pipe running underneath one of Duke’s storage ponds burst, pouring as much as 39,000 tons of coal ashinto the adjacent Dan River in central North Carolina.

It takes a year to remove 1 million cubic tons of coal ash and place it in a landfill, according to Duke. That means it could take 30 years and $1 billion to remove ash from one of the larger sites included in Monday’s order, compared with 15 years and $200 million to cover it.

Last fall, heavy rains from Hurricane Florence washed out a portion of a new landfill used to dispose of coal ash at Duke’s Sutton Plant near Wilmington, N.C. The landfill was under construction as part of Duke’s cleanup plan. An undetermined amount of coal ash washed into nearby waterways.

Environmentalists cheered Monday’s decision, saying it was important to move coal ash far from sources of drinking water. Coal plants have traditionally been built near lakes and rivers, with storage on site.

“We will no longer have to hold our breath every time a storm, a flood or a hurricane hits a community with unlined coal ash pits sitting on the banks of waterways,” said Frank Holleman, a lawyer with the Southern Environmental Law Center.

It isn’t clear whether or in what venue Duke would appeal the decision. A Duke spokeswoman said the company is evaluating all options.

As of 2010, the Environmental Protection Agency estimated there were about 600 coal-ash ponds and 300 landfills at 495 coal-fired power plants nationwide.

Duke said the vast majority of the basins that are being closed nationwide are being capped, not emptied completely.

State energy regulators have said that cleanup costs could be collected from customers because they are incurred as part of the cost of doing business, according to Duke. Duke is collecting $175 million annually from its 3.4 million customer accounts in the state for coal-ash costs.

Write to Valerie Bauerlein at valerie.bauerlein@wsj.com